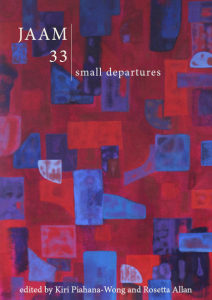 to the civic gardens. In spring
it was covered all over with sweet
sweeping wisteria. At the end

under. There were, too, vents
in the ground that billowed
with sulphurous steam and gases,

sudden fountains of boiling
water erupting from the footpaths,
yes, it was an unusual place

but I could have sworn it gentle.
But now when I return, people
who stayed on in the town

want to tell me about a girl
they once knew who they swear
was a wild one. She would go

to forbidden dance halls,
hitchhike at midnight in order
to jive, hang out in seedy dives

drinking Pimms with unsuitable
men and skinny dip in hot pools
at the drop of a skirt. (Well, I do

something in common). For
the most part the descriptions
of this girl are the history

of someone I might have come across,
glimpsed from the corner of my eye
as I studiously read serious books,

and observed, now and then,
the picturesque landscape. It is possible
this girl had a double

life, but I wouldn't recognise
her if I met her now. What I can tell
you is that that girl left town.

I think I have met this girl Fiona writes about. I know the town. And I know that that (love the emphasis of the double that) girl left that town.

When I am reading a literary journal I am always on the qui vive for a poem that - by some prodigy of technique, or with a preternatural narrative ease, or because underground forces are at work that cannot be denied - gives me a good going over. I tap out. I submit. I even laugh a little. Well, that was a poem and a half – I say to myself. And then I email the poet and ask – Please may I post your poem on my Tuesday Poem blog? (Share the joy around, right?)

Fiona answered promptly and gave me permission to post. I enquired if the poem was to be in a forthcoming book – and it is. Due soon it appears, as I google. This Change in the Light from Godwit.

And JAAM (just another art movement) in which the poem appeared, is a mag I always like to be in, and that I always like to get in the post and sit down and read, because it is fresh and smart and knowing, with a well odd kick in its gallop. 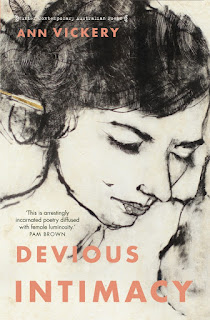 You can lead a horse to water

Because I am not into poetic husbandry,
I don't see the point of a desiccated dedication
to desire; animal allure, the pre-emptive absence
of a heart weighty as a hummingbird. Counting
the hours spent trying to differentiate myself
from want or its dereliction, that four letter word
nobody swears by. On righteous days,
I like to fashion myself as a globe-trotting man-scold.
I've been told to hide jewels in strange places
and sometimes wondered what other stylistic effects
were to be found had I checked the trough.
All my good thoughts expatriated; they write
to me sometimes,
a little lonely, a little perplexed. Transnational
orphans in a romantic lexicon whispering
sweet annunciations to demotic farmhands dressed
as yogi initiates. The love of a good obscurity,
besting the next beast. Listening to the troubadour
at night-time croon:

o where did my amatory context go?


The last launch of 2015 for me was Ann Vickery's Devious Intimacy (Hunter Publishers) at The Alderman in Lygon Street. Gig Ryan was the launcher, and was trenchant and mischievous, and the book is a bit that way inclined too. Or so it seemed to me, as I sat to read in the slack, slow hours of January. An intriguing work. It was almost beyond my grasp. Almost. I ate up the feminist ambiance, of course, and I appreciated the slippages and coinages. 'Bobbergirls' is such fun. 'Thiefdom' mints new perspective. 'Furlicued fan', hooray. Much enjoyment to be had with the plays on words. It was not an easy book for me to read (for instance, I had to google to place Jack Spicer, who supplies the opening statement for the work). But I so enjoyed the ins and outs of it. I like a good cryptic crossword, and in some ways the poet is teasing us this way, setting us delicious conundrums. And now I will – 'sois belle et tais-toi!'

Posted by Jennifer Compton at 4:03 AM No comments: 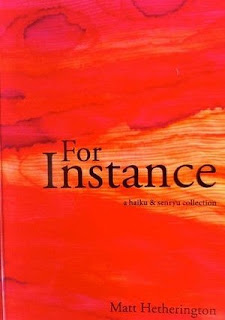 feeling bored -
until i step
on a snail

letting out a fly i let in a fly

This beautifully-produced, plangent book is one of those books you want to invest in and carry around with you. The first time I read it, it sat me down, and cooled me off, and gave me heart. Months later, I read it again, and again, it worked its magic. It slowed me, it centred me, it woke me up. This is what I want poetry to do. I want poetry to remind me of who I am. Thanks Matt, for this scrupulous, humble manifestation, and to Coral Carter of Mulla Mulla Press for embodying it as a book.

The four haiku/senryu I have chosen (with some difficulty) are in their narrative order, but as the little book works like clockwork, plucking four of the cogwheels out, almost at random, isn't the best way to get at the ticking mystery.

For Instance was given a well-considered, thumbs-up review by Geoff Page, in tandem with my verse novella, Mr Clean & The Junkie. As Matt and I are such good friends (and I miss him so much since he moved up North) it gave me a great deal of pleasure when our books were yoked together.

But just let me take the chance to assert that Geoff misread my heroine. She is not - '… a young heroin-addicted prostitute.' Youngish, certainly. On the cusp of young, but seen better days. Heroin-addicted, no way. Gambling is her tipple. And prostitute? That is moot. Perhaps she is what men of a certain generation would have called 'a party girl' or a 'good-time girl.'
This posting is focussed on Matt's alchemical book, of course, but the happy accident of the tandem review gives me a window to refute a misreading that has niggled at me for a bit.
A later review by Elizabeth Morton repeated this error, and I began to feel as if I had omitted to include a piece of crucial explication, but when I communicated with Liz, she told me she had read Geoff's review before she wrote hers, and maybe she had picked up on his misapprehension. And so it goes. Anyway, anyway, I am thrilled to report that Mr Clean & The Junkie has been long-listed for the Ockham NZ Book Awards – but if the judge's report includes the words 'heroin-addicted' or 'prostitute' I will start tearing my hair out. And take to writing evermore adamantly well-delineated character parameters. I can't help but feel that it is my error.


Posted by Jennifer Compton at 4:51 AM 4 comments: