Midnight, and something has fallen into the grass.
We go out to see what it is:

a little chip of light
that’s hard for us to look at.

We kneel and shield our eyes,
we think of those paintings of the shepherds

and the glazed angels
who bring such truth, such happiness.

Above, the stars are wrapped around the world.
There are so many of them,

jostling for space.
In parts of the sky they’re dense, like breath in the cold,

others are off by themselves,
lifted as gently as debris on that calm, black sea.

When we pick it up, its heat
is a marsupial heat, fleshy and generous.

We take it inside, cradling it
in our arms, hoping the night won’t miss this one small star.

I got to go to the launch by Robyn Rowland of John Foulcher’s new book – The Sunset Assumption – at Collected Works in Melbourne. This poem, Star, is from the book. The Sunset Assumption was conceived in Paris while John was in residence at the Keesing Studio. Pitt Street Poetry is a new press and this is their first production which was released as a hardback, paperback and e-book.
I have great hopes for them as a force for good!

If you want to read more Tuesday Poems click on the quill icon at the top.
Posted by Jennifer Compton at 6:44 AM 1 comment:

Tuesday Poem - This Is Not a Dream by Matt Hetherington 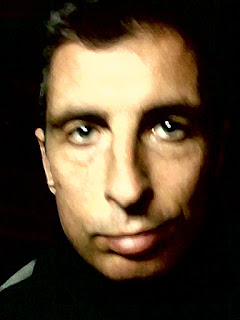 This Is Not a Dream

I had the honour and delight to launch Matt Hetherington's new book Eye to Eye last week in darkest Thornbury at Tago Mago. The book is now available at Collected Works in Melbourne, and also, of course, from the author.
(Matt is on Facebook so he is easy to find.)

If you want to read more Tuesday Poems click on the quill icon at the top of the page.

Tuesday Poem - The Convergence Of The Twain by Thomas Hardy


The Convergence Of The Twain

In a solitude of the sea
Deep from human vanity,
And the Pride of Life that planned her, stilly couches she.

Over the mirrors meant
To glass the opulent
The sea-worm crawls-grotesque, slimed, dumb, indifferent.

Jewels in joy designed
To ravish the sensuous mind
Lie lightless, all their sparkles bleared and black and blind.

Dim moon-eyed fishes near
Gaze at the gilded gear
And query: "What does this vaingloriousness down here?" . . .

Well: while was fashioning
This creature of cleaving wing,
The Immanent Will that stirs and urges everything

Prepared a sinister mate
For her - so gaily great -
A Shape of Ice, for the time far and dissociate.

And as the smart ship grew
In stature, grace, and hue,
In shadowy silent distance grew the Iceberg too.

Alien they seemed to be:
No mortal eye could see
The intimate welding of their later history,

Or sign that they were bent
by paths coincident
On being anon twin halves of one august event,

Till the Spinner of the Years
Said "Now!" And each one hears,
And consummation comes, and jars two hemispheres.
Thomas Hardy

Tuesday Poem - The Fall of Aphrodite Street by Les Murray

The Fall of Aphrodite Street

So it’s back to window shopping
on Aphrodite Street
for the apples are stacked and juicy
but some are death to eat.

For just one generation
the plateglass turned to air –
when you look for that generation
half of it isn’t there.

An ugliness of spirit
leered like a hunting dog
over the world. Now it snarls and whines
at its fleshy analogue.

What pleased it made it angry:
scholars Score and Flaunt and Scene
taught that everything outstanding
was knobs on a skin machine.

Purer grades of this metaphysic
were sold out of parked cars
down alleys where people paired or reeled
like desperate swastikas.

Age, spirit, kindness, all were taunts;
grace was enslaved to meat.
You never were mugged till you were mugged
on Aphrodite Street.

God help the millions that street killed
and those it sickened too,
when it was built past every house
and often bulldozed through.

Apples still swell, but more and more
are literal death to eat
and it’s back to window shopping
on Aphrodite Street.

I really liked this poem when I came upon it in the 90s in Les’s book Dog Fox Field. It spoke to me. I had two young children and I had been following the progress of the AIDS plague since the first mention of it in a newspaper in the 80s. And remember that back then we did not know quite how far it might go. I am a heterosexual woman who had come to maturity during the 60s and had taken advantage of the freedoms suddenly offered to us all. But I have got to say it wasn’t all that great. Looking back. Anyway, I had had the chance to be free of the material consequences of ‘easy virtue’ – pregnancy and incurable sexually transmitted diseases. But it seemed as if my children wouldn’t. I would have to teach them to be cautious. I had hoped that once we got over our greediness at suddenly being free of material consequences, we all might pay a little more attention to the spiritual consequences. I had been mugged quite a few times on Aphrodite Street and had the scars to prove it. And I can’t be absolutely sure that I didn’t enter into the spirit of the times and give as good as I got.
Anyway, back in the 90s, when I read this poem, I was very much thinking and feeling that we had had our chance, and we blew it.
Some time later I found out the poem had been the centre of quite a literary controversary. Les had changed the name from The Liberated Plague. But I have never bothered to follow it up until I decided to post the poem today – just because the rhythms of it still connect with me.
‘You never were mugged till you were mugged
on Aphrodite Street.’
So I googled and found that it is still out there in cyberspace. Interesting reading I thought.

Tuesday Poem - The Horse is Loose by Emma Barnes


The Horse is Loose

The horse is loose. In traffic. Eyes all white, the
saddle flapping, stirrups beating.

A red ute speeds beside it. Somone half out the
window grasping for reins, she pulls

down as the horse rears next to the red, red,
truck. The horse digs in its heels. Stops. The

rider tumbles through the window. She lands on
the smallest boots. The horse, the horse

is now a tap dancer refusing to stand still, it
does a quick routine, shuffle hop step, the

shim sham shimmy. Backwards, backwards,
back legs up onto grass, onto hill backing

away. The rider. Her helmet frames her neck,
tinier, her checks insignificant. They stand

together, jarred limb-ed, vibrating knee-ed. Both
heaving in, breath in shovelfuls.

Here is the link to Emma's blog - http://elbowsonthetable.blogspot.co.nz/
Posted by Jennifer Compton at 9:50 AM 32 comments: